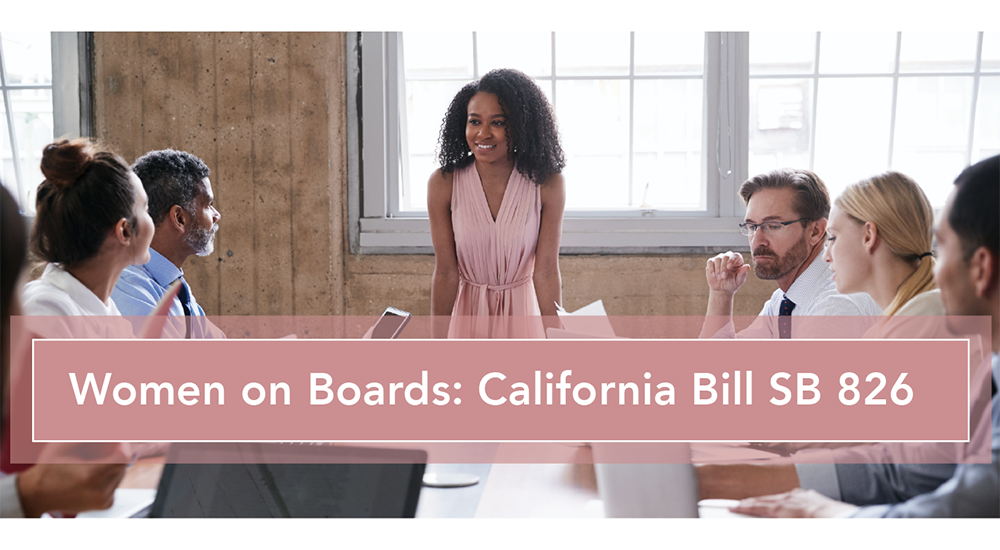 NAWRB wrote a formal letter in support of 2020 Women on Boards to the Banking and Finance Committee of the California State Assembly regarding the SB 826 bill, which requires public companies without women board members to hire at least one woman by the end of 2019. The bill is an important step in diversity and inclusion, as well as for the advancement of women, although it should be adopted with a mindset that acknowledges gender diversity as a multifaceted issue that will require a concerted effort at all employment levels.

Following our letter, SB 826 passed both the Banking and Finance and Judiciary Committees. At time of writing, the bill now awaits its fate in Assembly Appropriations and Assembly Floor before it lands on the Governor’s desk for signature. Although it faces strong opposition for varying reasons, the future is bright for the bill. If it passes in California, it will likely be a working template for other states to adopt as their own.

In terms of female representation on corporate boards, California, at 15.5 percent, lags behind the national average of 16.2 percent for the Russell 3000. Also, the bill states, “one-fourth of California’s public companies in the Russell 3000 index have NO women on their boards of directors.”

SB 826 requires that at least one woman be on the board of publicly held companies in California by year end 2019. Existing male board members would not be replaced. If there is no turnover of board seats in 2019, held by men, then a new seat would be added for a woman. This proposed law does not apply to private companies. The Chambers that oppose SB 826 represent primarily small private companies, which would not be affected by this bill.

While the bill is not an all-encompassing solution to the obstacles that deter women’s advancement through the corporate ladder— from entry level to the C-suite and boardroom— this legislation will be an impactful incentive for public companies in California to start addressing these issues.

Setting gender quotas is one way some organizations across the globe are trying to increase female representation at the executive level and in boards. Although gender quotas have been successfully adopted and achieved in countries such as Norway, Iceland, Sweden, and so on, there has been considerable resistance among both male and female board directors around the world about the necessity and efficacy of gender quotas.

An article published in the Harvard Business Review written by Dr. Margarethe Wiersema, Dean’s Professorship in Strategic Management at The Paul Merage School of Business, University of California, Irvine, and Dr. Marie Louise Mors, Professor of Strategic and International Management at the Copenhagen Business School (CBS) shares various perceptions of gender quotas from over 60 male and female directors in the U.S. and Europe. Remarks range from the worry that it would result to the hiring of unqualified women into boards to concerns that it demeans women.

Some public companies in California may feel that they are already displaying diversity awareness in their hiring processes, thus enforced legislation is not needed. When they search for board members, taking into consideration candidates of both genders, their priority is hiring the most qualified directors.

An open mindset while reviewing candidates is good to have, especially since the board selection process predominantly occurs within social networks, but the numbers show it has not been enough for increasing female representation at the top level. At this rate, studies predict it will take over 40 years to achieve gender parity.

In order for significant change to occur, we have to adopt a more rigorous and formal approach to the problem of gender diversity and female representation at the board level. Gender quotas have resulted in not only greater diversity but also a more professional approach to the board selection process that is based more on merit than whom one knows.

However, legislation will only be successful if they are embraced internally by public companies, especially board directors themselves, into one of their core tenets. Gender diversity should not be seen as an end goal, but as an integral part of a company’s practices and functions.

An overriding theme of studies regarding this topic (e.g., Mercer’s When Women Thrive, McKinsey & Company’s Women in the Workplace 2017) is that an effective method of increasing women’s representation will require more than meeting quotas. Placing experienced women on boards and appointing them to senior executive positions is important as we need more diverse voices at the table where major decisions are made. However, for women professionals to be perceived as more than just token hires, there needs to be a culture shift in companies that embraces diversity and inclusion.

In addition, more women need to be hired at entry and management levels, and given opportunities to rise through the ranks, from management to the C-suite. Once current executive women leave their positions, we need to create a pathway for other women to take their place—a place they earn by merit, and through the visible hard work they did to get there.

Of course, it will take time for companies to create a pipeline that helps advance women through their corporation. SB 826 gives us an opportunity to take action now regarding one aspect of the lack of female representation on boards. The bill can always be revised as its effectiveness is reviewed by the Secretary of State through implementation, so that it better suits our shared goals.

Having more women on boards is important to have now, not only to have more voices representing the interests of stockholders, but also so that more generations of women to come will have role models to look up to as they pursue their goals in the corporate world. If they can see her, they can be her.