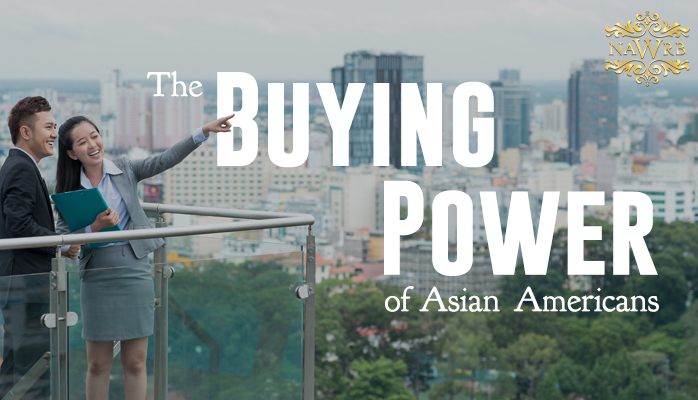 The housing market has been turbulent for the past decade, but 2016 has started with a positive trend. According to the Nationwide Economics’ Health of Housing Markets (HoHM) Report, the Leading Index of Healthy Housing Markets (LIHHM) for the third quarter of 2015 was higher than 100, their neutral number, and this typically designates a healthy market. The report also confirms that the Metropolitan Statistical Areas’ (MSA) LIHHM performance has been improving since 2012.

Did you know that since 2000, the Asian American community represents the fastest growing section of immigrant population in the country? China and India account for the maximum number of immigrants coming to the U.S. and have exhibited an equally rapid growth in buying power. This trend is expected to continue as minority homebuyers play an important role in the revival and sustenance of the housing economy. 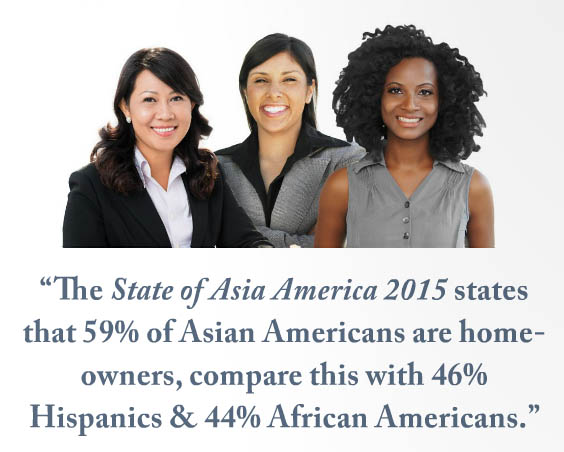 The Asian Real Estate Association of America’s (AREAA) State of Asia America 2015 report provides an in-depth look into this group’s buying capabilities, interests and patterns. As with other immigrant groups, the Asian American community has undergone a long assimilation process and while some have succeeded, others continue to struggle. On a broad basis, this community has transformed from being low-wage workers to one of the most educated and highly-paid groups of the American workforce. It is notable that more Asian buyers are investing their earnings in residential properties in the U.S., and Chinese homebuyers make up the biggest group of foreign investors.

Profile of the Asian American Community
Asian Americans and Pacific Islanders (AAPIs) make up the Asian American population that has grown by more than 45 percent between 2000 and 2010. The southern and western parts of the U.S. have seen significant increases and the AAPI population is projected to grow by 128 percent by 2060, according to U.S. Census Bureau’s population projections for 2014-2060.

Higher Homeownership Rates among Asian Americans
The average age of the AAPI population is 36, versus 42.3 for non-Hispanic whites; of these AAPI individuals, 32 percent are between 25 and 44, which is the most likely age group to buy a home. 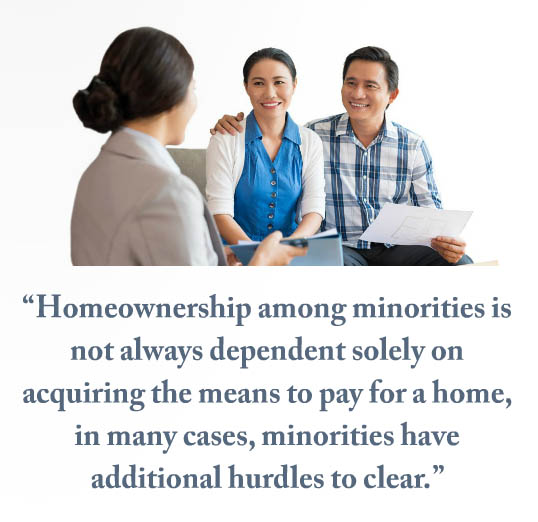 There is an adage that a house becomes a home when a family makes it their own. Like other cultures, the Asian community values family bonds and statistics show 80 percent of Asian American children grow up with both parents compared to the U.S. average of 63 percent. This provides a more stable household that can accumulate the capital to achieve homeownership. Multi-generational homes are popular too, as 28 percent of Asian American families comprise two or more adult generations; hence, the demand for bigger homes to accommodate the occupants.

Education is a supporting factor when it comes to homeownership. AREEA’s report shows that 49 percent of AAPIs have a Bachelor’s degree and 21.2 percent have advanced degrees like a Master’s or a PhD. The general U.S. population holds Bachelor’s and advanced degrees at rates of 28 and 10 percent, respectively.

Another factor that promotes AAPI buying power is their strong employment rate; 55 percent of Asian American households have at least two employed adults compared to the 45 percent U.S. average. AAPIs have the lowest unemployment rate among all minority groups in the nation and also earn the highest per capita and highest average household incomes. Harboring a median household income of $72,472, AAPIs have high prospects for buying homes. Indian Americans have the highest median income of $100,547 and Bangladeshi Americans earn the least with $51,331. The report also affirms that AAPIs have a higher median personal income: compare $66,000 to the U.S. average of $49,800.

Apart from the corporate workforce, Asian Americans thrive in the small business realm and own more than 1.6 million businesses that employ almost 3 million Americans.

Interesting Facts About the AAPI Community:

Discrimination in the Housing Continuum
Cases of redlining occur across the nation and according to the Federal Reserve Bank, only 5.2 percent African Americans received home loans in 2014. Hispanics accounted for 7.9 percent for the same year and even though redlining has reduced, discrimination is still prevalent. Discrimination does not stop with mortgage lenders and banks; the AREAA report states that Asian renters get informed about 10 percent fewer rental units and are shown almost seven percent fewer units than their white counterparts. AAPI homebuyers learn about 15 percent fewer available homes and are shown almost 19 percent fewer homes that white homebuyers.

Exclusionary practices such as these combine with lack of education and low-income jobs, hinder minority communities from advancing to homeownership. Several Asian Americans, though, have overcome these obstacles and impacted the housing market. Homeownership among minorities is not always dependent solely on acquiring the means to pay for a home, in many cases, minorities have additional hurdles to clear. 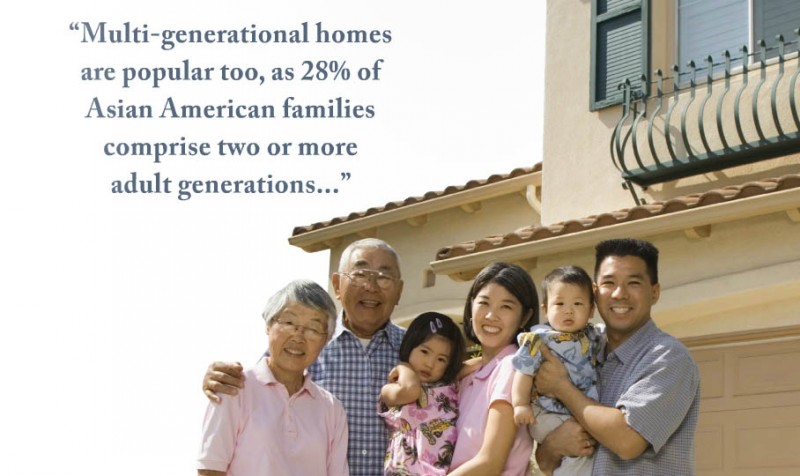 Homeownership Rates
The State of Asia America 2015 states that as of 2014, 59 percent of Asian Americans are homeowners, compared with 46 percent Hispanics and 44 percent African Americans. We have seen compelling data accounting for the buying power of the Asian Americans; do you think lack of education and good employment are keeping other minority groups from achieving homeownership at better rates?

According to data from the National Center for Education Services, the number of 25 to 29-year-old African Americans with Bachelor’s degrees has increased from 13 percent to 22 percent between 1990 and 2014. A similar positive trend is seen among Hispanics, with an increase from eight to 15 percent in the same time frame. There has been an increase in the number of 25 to 29-year-olds with Master’s degrees or higher achievements too, with African Americans moving from two to four percent and Hispanics from two to three percent.

Although we may not be able to establish a direct connection between higher education and homeownership, it is a significant factor to consider. Education provides better career and growth opportunities, leading to economic stability and greater chances of becoming a homeowner. For Asian Americans, their educational and career achievements have proven extremely rewarding in making homeownership a reality.