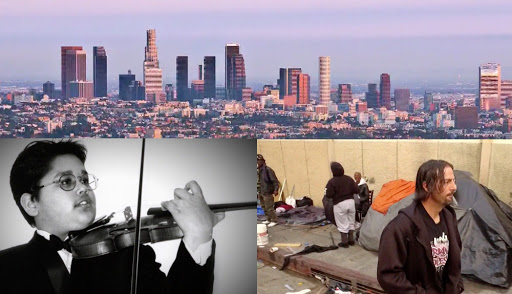 Of the half a million people across America homeless at any given time, a quarter reside in California, with 55,000 in Los Angeles alone. Los Angeles’ Skid Row, 52 square blocks of blight, has the highest concentration of homeless in America.

Skid Row came about under unofficial policy of containment, but now thousands of homeless are spilling out into other areas in LA creating an even greater crisis.

A recent Dateline profile, “Homeless in America and the Angels of Skid Row” shined a light on the growing problem, made worse by the recession of ten years ago, rising rents and stagnant wages. This has led to a homeless population that doesn’t fall so easily into typical drug-addict, perpetrator stereotypes. Many of these citizens are members of the working poor, with some working full-time, who don’t make enough to afford rising rent and cost-of-living. These people sometimes end up living out of motels or cars.

The situation is further complicated by Los Angeles residents willing to vote to increase their own property taxes to provide for housing for the homeless, but who often prove resistant to housing solutions existing in their neighborhood.

Despite the desperate nature of the problem, which now sees moms, dads and even children on the streets, there are many people who work every day to bring attention, resources and a voice to those who have fallen through the cracks.

Among those working to combat change is Vijay Gupta, a violinist with the L.A. Philharmonic who founded, and acts as Artistic Director of, Street Symphony. Gupta is a violin prodigy who at 19 years old became the Philharmonic’s youngest violinist ever. He wanted to be able to go beyond delivering a world-class listening experience to the homeless on Skid Row, by providing opportunities for them to learn and participate in music as well, teaming up with The Urban Voices Project, a Skid Row community choir. While the immediate needs of the homeless are essentials like housing and counseling, the role of the artist, Gupta believes, is to act as a bridge by changing the conversation and narrative about L.A.’s homeless population.

With members of L.A.’s arts community bringing awareness and healing, as well as countless volunteers, organizations like the Midnight Mission, and community outreach workers who work with addicts, the mentally ill and people who have fallen through the cracks, real progress is being made and there is hope for greater change.

LA Family Housing is one organization that has been effective in getting people immediately off the street and into housing with access to supportive services.  The nonprofit formed in 1983 when a group of local interfaith leaders in L.A.’s San Fernando Valley noticed an uptick in homelessness in their neighborhood and decided to do something about it. Together, they secured funding for the purchase of a forty-room hotel they converted into a temporary homeless shelter.

Eventually, with the added experience of a developer, the organization grew into a housing continuum—providing both temporary and permanent housing for the homeless and lower income folks.

Outreach workers like Eric Montoya look for the chronically homeless and try to convince them to get into housing and receive services. Sometimes, it takes years to gain a person’s trust: one woman learned to trust Eric over a period of five years before she agreed to help. She is now off the streets and into an apartment.

The goal is, through the use of both private and public funds, to get homeless off the streets as quickly as possible, says President and CEO of LA Family Housing, Stephanie Klasky-Gamer. Part of the reason for their success is that they work carefully with neighborhoods to alleviate concerns about the change. Housing is deliberately designed to be attractive and blend into the neighborhoods with services located as closely as possible to the residences.

One young woman’s story is an example of a family that doesn’t easily fit into negative homeless stereotypes. The woman, who ironically worked for a homeless shelter herself, was living paycheck to paycheck when her rent was raised, which led to an eviction and eventually the family was living in their car. Embarrassed, they hid their situation from friends and coworkers. Finally breaking down in front of a co-worker, the young woman connected to LA Family Housing, which helped them to get housing vouchers, eventually leading them to affordable housing. From there, they were able to resume making their own rental payments and things are looking up.

“The task is daunting, but you know you are making a dent,” concludes Stephanie Klasky-Gamer.

You can view the full inspirational Dateline Story here.