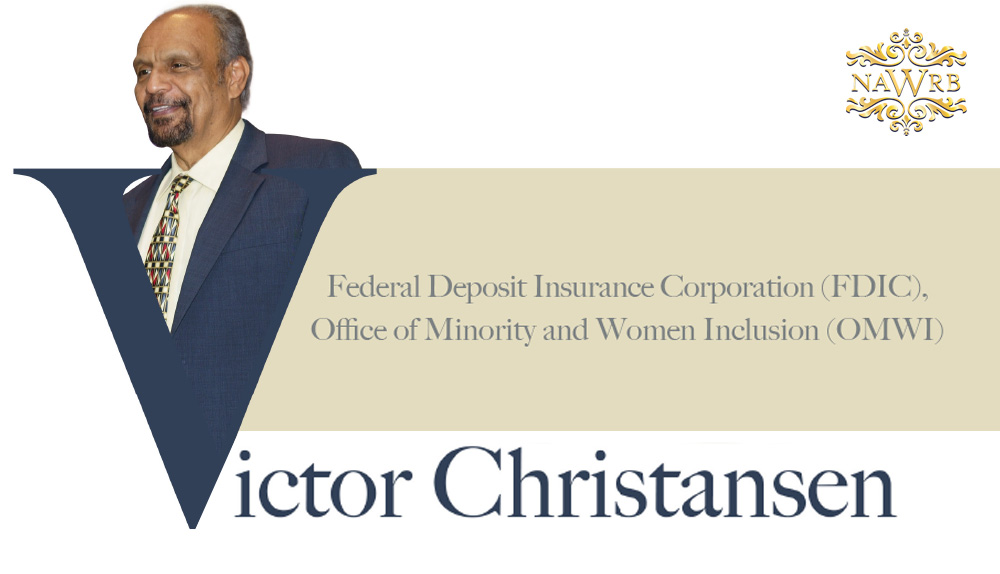 NAWRB: For those who might not know, describe what you do.

I work in the Office of Women and Minority Inclusion and I’m a branch chief. The branch is called Minority and Women in Business Diversity Inclusion branch.

NAWRB: Where did your career begin?

I started in the general accounting office which is now the Government Accountability Office, the GAO, and I worked at the Department of the Interior for many years. Then, in 2012, I came to the FDIC.

NAWRB: What do you see as the main mission of your work?

NAWRB: That’s a lot of work. How do you manage so many institutions?

The staff. There’s eight of us all together. But it’s a voluntary program so we have to ask the banks to submit a self-assessment. Starting last year, we’re only doing banks with over 100 employees, so we’re talking 800 approximately, and out of those 800 we got 137 responses.

NAWRB: What would you say is the most challenging aspect of what you do?

NAWRB: Do you think of ways to get more of them to respond?

Believe it or not, this is our second year and we thought it to was very successful. Because we had 95 last year, so it went from 95 to 137, which is a start.

NAWRB: Do you think the #MeToo movement might have had an effect as well as your efforts to push up the level of respondents?

Possibly, but I really don’t know. We did work with a group called Compliance Alliance, and they represent about 27 different states, their groups and their state associations. So they helped us publicize it to their group, which is most of the country. So, I think that helped, and  the #MeToo movement may have helped too.

NAWRB: So, you’ve attended this conference before.

Yes. I believe I’ve been here for everyone. At least that’s what Desiree tells me.

NAWRB: What do you hope to get out of this one?

What I hope to get out of it is to let people know about the OMWIs and what we do and how to do business with our organization. And hopefully, get people signed up to do business with in the future. We were doing a lot of real estate type business because of bank closings. We had a bank crisis a few years back, and, up until last year, I would say because we take over the bank’s assets and sell them. We’re the receivership when a bank closes. And of course, we end up with a lot of property— houses, commercial property— that we have to sell.

There were a lot of different things that affected it. We had a large percentage of money going to the real estate industry: brokers, agents, legal, environmental inspection, appraisers, auctioneers. So that’s when we started coming. We had a lot of business in real estate—to try and get your group to start looking at ways to work with us. Fortunately, since the bank closings are down, the money that we’re spending in real estate has gone down. And we have what we call NAICS [North American Industry Classification System] Codes. You put your business under that specific code and real estate would be under a code. Over the last few years, real estate—different areas of real estate—were in our top ten NAICS codes we spend money in. This year there’s only one.

NAWRB: Who were you selling to primarily? Since it’s a government agency, were you limited to who you could sell to?

We would hold what we call asset purchaser events. Us in combination with the DSRR, which is the division of receiverships. We reach out to minority and women investors. And we had one last year in New Orleans. It was great. I left here [the NAWRB conference] and flew to New Orleans and we haven’t had any since. We were having maybe about three or four a year. I don’t think we are going to have any this year. We haven’t had a bank closing this year, and we’re in July. They estimated seven, but it’s probably going to be less than seven. Back in the crisis in 2010, there was 57.

NAWRB: What issues concern you most about women, and what do you think we should do to address them?

Well, the main part of my job is to make sure we do outreach to minority and women businesses, get them involved in our programs. So, you know, I think we’ve been going fairly well. The last couple of years it had dropped significantly because the money dropped, so we’re only doing 18.5% of our business the last two years with minority and women, and this year it’s up to 29.6% so far. Prior to that, it had always been up in the high twenties, low thirties, so looking to make sure that women and minorities are involved in the process. So, we do these kind of outreach events and talk to women-owned companies all the time, encourage them to get on our contact and resource list and try to get in with the FDIC.

NAWRB: How do you mitigate stress when you work how do you balance your work and personal life?

I will be the exception to what most men will say because stress is a bad thing obviously, and a career, when you have a high profile job, is really stressful. But, I’ve been in the government for a lot of years and I’ll probably only work a couple of years, so the stress level is down. My bosses pretty much leave me alone. I do my own thing. I don’t know why. They figure “Hey, just leave him alone.”

NAWRB: What do you like to do in your spare time?

Travel mainly. Caribbean. We’re going to Jamaica towards the end of the year. Last year I went to Spain.