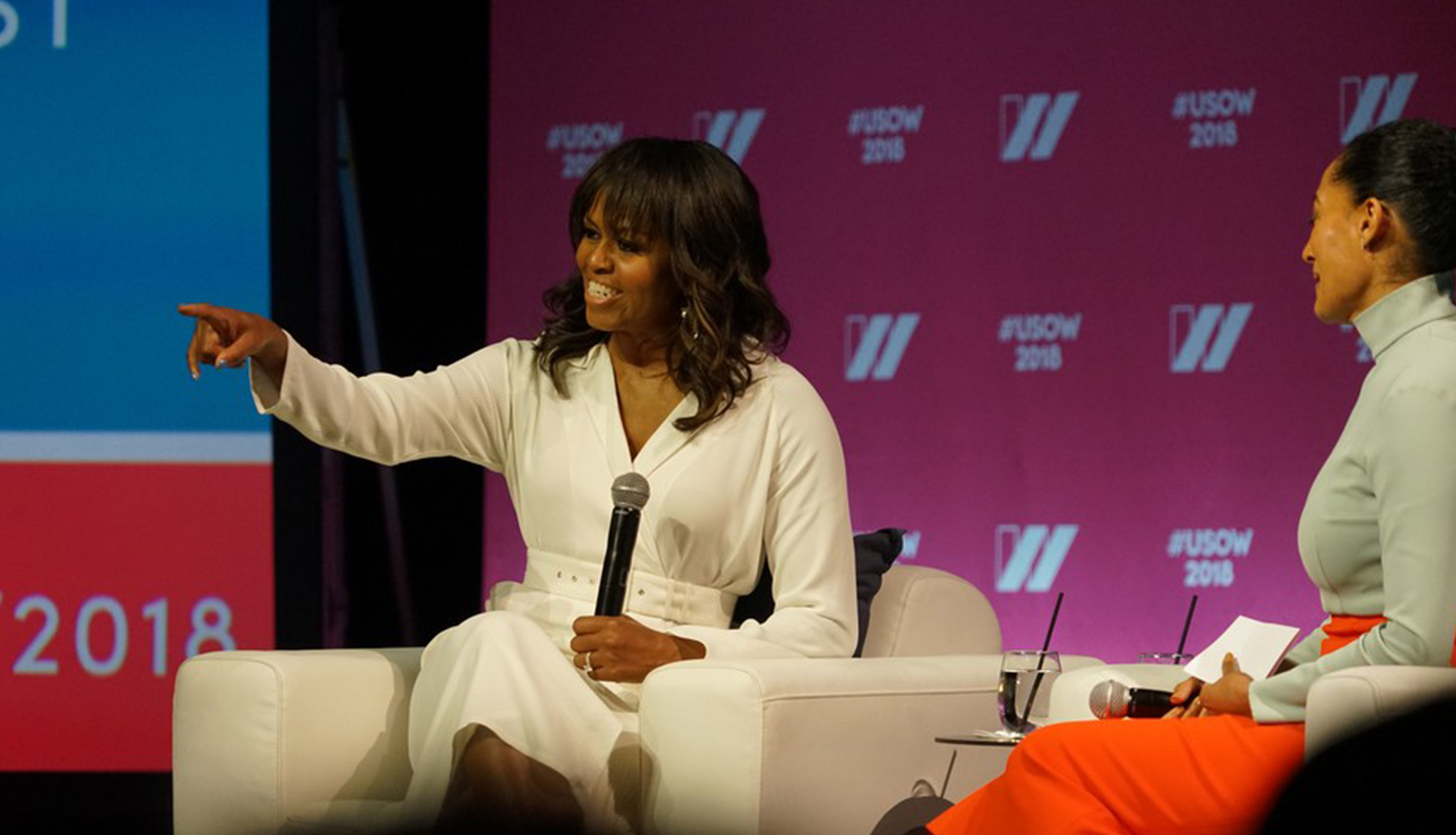 Last weekend, over 6,000 women, from international leaders and executive women, to celebrities and politicians, gathered at the 2018 United State of Women Summit in Los Angeles, California, to discuss women’s issues and gender equality. Following the inaugural, day-long event in 2016, this year’s multi-industry event was extended to two days chalk full of main stage and breakout sessions, networking opportunities, skills-based trainings and an interactive center with women-owned businesses and organizations.

One of the highlights of the event was the conversation between Michelle Obama and Tracee Ellis Ross, where they discussed how we can help young girls dream big, maintaining hope and how women can empower each other to use their voice.

Ross began the conversation by asking what made Obama realize that she could not be a bystander of women’s rights and had to speak up for gender equality. Obama notes her upbringing and childhood for helping her build confidence in her voice and opinions. This is because she had parents that listened to her and allowed her to express herself freely.

Obama states that it’s important to encourage children to believe in their ideas and intuitions, and to nurture their growth into influential adults in a supportive environment. “Kids know when they are being invested in, when people believe in them, when people care about them, but kids also know when they are not being invested in,” she states. Children are incredibly perceptive of their environment, and the way they are treated will play an important role in how they see themselves.

If children are not fortunate to have a supportive figure in their homes, they can always looks to role models who can light the path to the life they want to lead. She also notes that life is about practicing to be the person you want to be, which is why it is important to form good habits. “Life is practice. You are practicing who you’re gonna be,” Obama said.

Next, the two discussed whether girls today are dreaming of the same things their mothers did when they were younger, and how we can encourage them to dream even bigger. While young girls are breaking through traditional stereotypes of what careers are possible for women and men, Obama admits that girls are still taught to be perfect and to “dream of weddings and the security of the ‘Prince Charming’ coming to save them.”

Obama highlights the importance of teaching young girls to be comfortable with failure, which is often a stepping stone for growth, and to not hold themselves up to stringent standards. For women today to help the young girls in their lives dream bigger, she notes they will have to work harder. They have to advocate for women’s rights at the table and be willing to be uncomfortable and vulnerable to take risks for future generations.

“We have to start taking risks for our girls. We need to be willing to lose a little bit of something. Holding on to our seats at the table won’t be enough to help our girls be all that they can be,” she states. She adds that both men and women can make a difference for young girls through their influence and power.

Finally, Obama reminds us “we are the answer” to the problem of improving gender equality and women’s advancement. When prompted by the crowd about whether she would run for president, Obama states that this is misguided. “It’s not ‘Yes, you can,’” she reminds the audience. “It’s ‘Yes, we can’, and until we get that right it doesn’t matter who runs. We are the answer. All of us here are the answer to our own problems.”

We cannot wait for one person to make a change in the world; it takes the collaborative effort of everyone in their own spheres of influence. We can start making a difference in ourselves, and in our families and children, by honing our voice and speaking up for women’s rights, from opportunities for economic growth to gender equality.

After attending the inaugural 2016 State of Women Summit in Washington, D.C., which originated from the White House Council of Women and Girls, it is wonderful to see the continued effort to bring together collective voices for women.