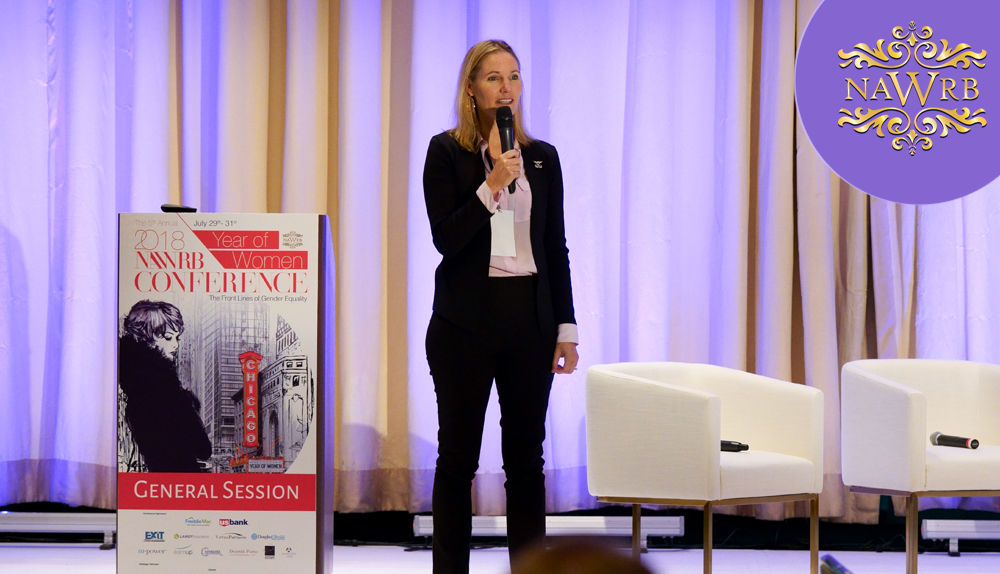 Veterans are in the minority of the American workforce and female veterans are an even smaller subset of the population, however, the impact veterans and women veterans can make to society can be huge. This is a point made by NAWRB Magazine contributor and Army Veteran Erica Courtney as she moderated our panel Women Veterans in Business: Unique Challenges and Opportunities.

Less than one percent of the population are women veterans, Courtney told the audience, adding “Our voice often gets overshadowed.” She made it clear though, that the combined voices of supporters and veterans together is powerful. It’s often hard for veterans to advocate for themselves she said, as for most veterans, it’s all about the team instead of the individual.

Erica opened up about signing up for the Army as a young woman on the eve of the First Gulf War, Desert Storm. She stayed on to become an officer, receiving a scholarship to attend the University of Hawaii.

When she was accepted to train as a Cavalry helicopter scout pilot the first instructor she encountered walked away, refusing to teach a woman. It took days to get an instructor to teach her how to fly and later she was subjected to rude language from male subordinates on her first assignment. Not one to be deterred, she put her head down and did her job well, winning over her team with both physical strength and leadership skills, but rude comments and skepticism are only some of the issues women veterans face.

Among the issues veteran women face is an underrepresentation in every area of influence. “If you don’t have a seat at the table, you are on the menu,” Erica bluntly said while outlining the impact of policy on business growth for women veterans.

Women veterans can benefit from policies that invest in their entrepreneurship, training, and provides access to credit. Role models are important as we need women who look like all of us represented in the media, Erica emphasized, telling us that adults with mentors are five times more likely to start a business.

Erica outlined other obstacles women veterans face including having to hide emotions, learning what being a female means outside of the military, suffering from higher rates of PTSD, divorce, and depression, fulfilling a need for support, access to capital and mentorship.

Our veterans panel was then introduced. All told of the challenges they faced and the issues they overcame while in and transitioning out of the military.

Leora Ruzin, VP of Secondary Marketing, Guaranteed Rate was an Army specialist from 1995-1999 with a top-secret security clearance. When she exited the military pregnant, she couldn’t find a job and ended up working at a McDonald’s. She connected with other Army wives finding fulfillment in assisting military families with transitions as she herself never got training on transitioning back to civilian life.

Chicago-based REALTOR and VP of Sales for Centered|RCG, Brande Hampton grew up in Vermont and joined the Navy after high school but the transition back to civilian life was harsh, partly because in the military everything is taken care of for you. One of the biggest things she believes veterans have a need for is financial literacy.

Charmane Sellers served in the U.S. Air Force in the early eighties at three bases as an avionics analyst, one of the few women to perform that role. She is now President and CEO of ALEON Properties, Inc. a construction and redevelopment company. Charmane is a survivor of assault while on duty and she carries the toughness it took to survive into running her business.

There’s hope she tells us. The VA tries to address sexual trauma in the military and women veterans can try to link up with other women’s organizations and movements for support.

In closing, Erica underlined that the military spends 20% of its budget on leadership and developing its officers. Leadership is ingrained in military training and as a leader in the Army, she learned to mentor people from all walks of life. This ability to lead sets veterans apart. Despite the unique issues women veterans face, with their ingrained sense of leadership and responsibility they are ready to meet challenges, whether in business or life.