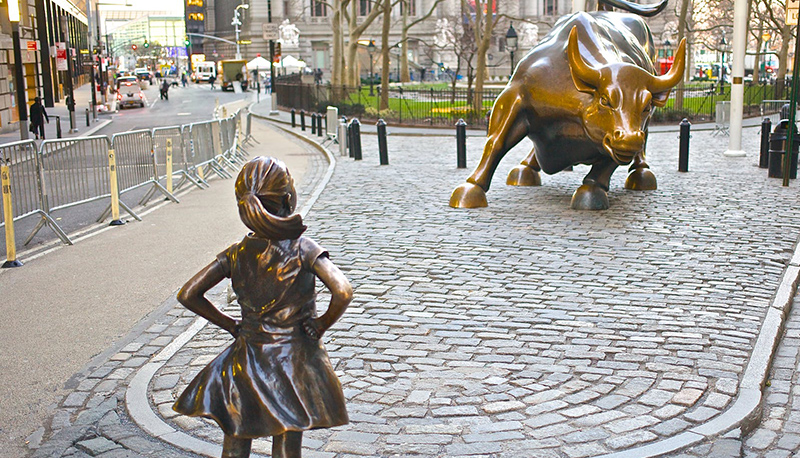 Installed in March 2017, the “Fearless Girl” statue facing Wall Street’s famous charging bull was erected as part of State Street Global Advisors’ (SSGA) campaign to increase the number of women on boards. The statue quickly gained national attention as a representation of women’s empowerment and the gender gap in the American workplace, particularly in the boardroom and C-suite.

One New York City artist has taken exception to this work of art, however, and this week created a statue of a small dog, titled “Pissing Pug,” positioned next to the fearless girl.

The reasoning behind the decision to depict a dog urinating on a girl?

“I decided to build this dog and make it crappy to downgrade the statue, exactly how the girl is a downgrade on the bull,” stated Alex Gardega, who considers the fearless girl statue a mere publicity stunt with no connection to feminism.

The pissing dog overlooks the good the “Fearless Girl” statue has done, representing gender equality and women on Wall Street. The statue of the girl has helped raise awareness of the gender imbalances in the workplace; it’s been a wonderful artistic expression of women’s perseverance and work to dismantle these roadblocks.

Constructing his protest on the basis of artistic integrity, Gardega argues that the “Fearless Girl” disrespects Arturo Di Modica’s famous bull; but why is it necessary to depict a girl being degraded?

The fact of the matter is that an artistic protest can take many forms; make a disapproving sign, write an op-ed piece for a local publication, promote the art that you do support. There are a plethora of choices.

Unfortunately, the “Pissing Pug” reminds us of the negative way women and girls are often treated, and it itself feels like an unrefined publicity stunt.