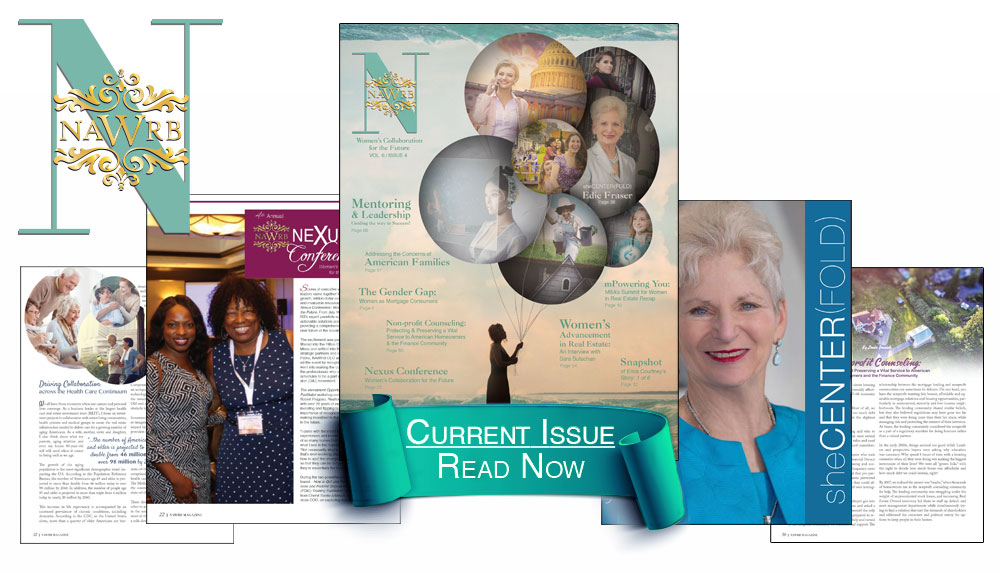 NAWRB Magazine is proud to announce the release of Volume 6, Issue 4, Women’s Collaboration for the Future, accentuating the necessity and power of women’s collaboration in unlocking upward mobility, while providing an in-depth look at the workforce within which this advancement is occurring.

As our sheCENTER(FOLD), we have the privilege of highlighting Edie Fraser, Chairman and Founder of STEMconnector®/Million Women Mentors® (MWM). Fraser, who at times shares stories with our readers she’s never discussed publicly before, delves into life, work, women’s history and the future she envisions for gender equality. Bringing with her the wisdom of a life and career spanning the better part of a century, and a talent for identifying solutions for change, Fraser encapsulates the meaning of collaboration in the women’s movement.

Our contributor articles offer valued insight into real stories from the American workplace, focusing on issues such as discrimination against women homebuyers, the concerns of American families and the growing needs of the aging U.S. population, to name a few. This issue we are also excited to feature the first of a moving six-part autobiographical series from U.S. Army combat veteran and 2020vet CEO Erica Courtney.

NAWRB Magazine is your resource as a leader and innovator in the housing ecosystem. Where will you stand in the future of our industry?