Chief Executive Officer of the Miami Association of REALTORS

Construction cranes in Downtown Miami and throughout South Florida help tell the story of a fast-growing population center and global business hub. Miami’s skyline—a visual marvel with awe-inspiring, high-rise buildings overlooking the Atlantic—has changed more rapidly than any other American city. Global investment from an array of countries have helped fuel the development.

Foreign real estate buyers account for 36 percent or $6.1 billion of South Florida total sales volume, according to the 2015 Profile of International Home Buyers in Miami Association of REALTORS® (MIAMI) Business Areas. That is more than four times the eight percent national percentage of foreign buying activity. The annual survey, which was conducted by MIAMI and the National Association of REALTORS® (NAR), is just one indicator of how attractive South Florida has become to international buyers.

At a time when stocks, bonds and world economies are declining, Miami real estate offers an appreciating asset to global investors.

With its close proximity and easy access to Latin America, Miami has long attracted international home buyers seeking a secure place to invest their money and a safe place to live with their families. Events in other global markets, including the economic slowdown in China, will only strengthen South Florida’s position as a global destination for foreign investment.

The top countries of origin for consumers purchasing properties in the counties of Miami-Dade, Broward, Palm Beach and Martin are: 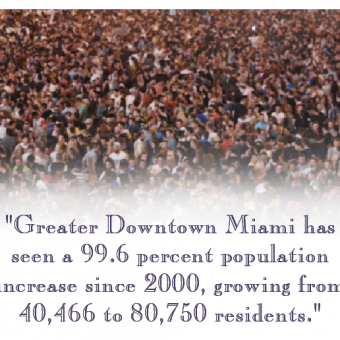 Approximately 51.3 percent of Miami residents are foreign born and the Miami-Dade County population speaks up to 100 languages. Miami’s concentration of foreign-born residents is more than two-and-a-half times the national average of 19.4 percent, according to the U.S. Census Bureau.

Once reliant on tourism and real estate, Miami has diversified its economy to become one of the world’s top business hubs. Personal finance website WalletHub recently ranked Miami as the second-fastest growing economy among large U.S. cities, according to data from 2010 to 2014. The study also ranked Miami first in full-time jobs increase and working-age population growth; sixth in poverty-rate decrease; seventh in business growth; and 10th for median household income growth.

Miami’s technology hub is being led and supported by a strong ecosystem. Organizations such as eMerge Americas, the Idea Center and Venture Hive provide resources to incoming software, technology and IT entrepreneurs. The results are impressive, according to Endeavor Miami; in 2014, Miami-based startups attracted about $49.4 million in venture funding.

Top Market for the Wealthy

In the Knight Frank’s prestigious 2015 Wealth Report, Miami ranked as the sixth most important city in the world to ultra high net worth (UHNW) individuals. Miami and New York were the only North American cities to make the top 10 list of the report, which is issued annually by London-based real estate consultancy Knight Frank. London, New York, Hong Kong, Singapore and Shanghai rounded out the top-five most important global cities.

Miami offers UHNWs the ability to purchase a luxurious home with access to superior schools and shopping opportunities akin to London. In addition to South Florida’s weather and beaches, the world’s elite also like Miami for its developing art scene. The Art Basel show draws the world’s top collectors, and the Wynwood neighborhood has gained national and global attention for its trendy local art. The Adrienne Arsht Center for the Performing Arts and a waterfront art museum opened recently in Miami. A new science museum will open next year.

The lack of a state income tax also entices U.S. citizens, particularly those living in the colder climates in the Northeast, to establish residency here. The affluent from high tax states like New York and Connecticut can afford to purchase more expensive homes in Miami because of the tax structure.

Greater Downtown Miami has seen a 99.6 percent population increase since 2000, growing from 40,466 to 80,750 residents. Brickell—which is the core of Miami’s banking, investment and financial centers—has seen the largest increase in downtown, growing from 12,904 residents in 2000 to 32,489, according to the Miami Downtown Development Authority (DDA).

The population increase has led to healthy business activity in Greater Downtown Miami. About $4.47 billion in gross sales occurred in the downtown area in 2013-14, a 3.45 percent year-over-year increase, according to a recent report commissioned by the Miami DDA.

Miami’s ability to attract global investment is not just seen in its robust real estate, population and start-up companies. It can be seen in its booming retail.

As a center for global investment and a major destination for international home buyers, South Florida is well positioned to continue growing as a world-class global region.