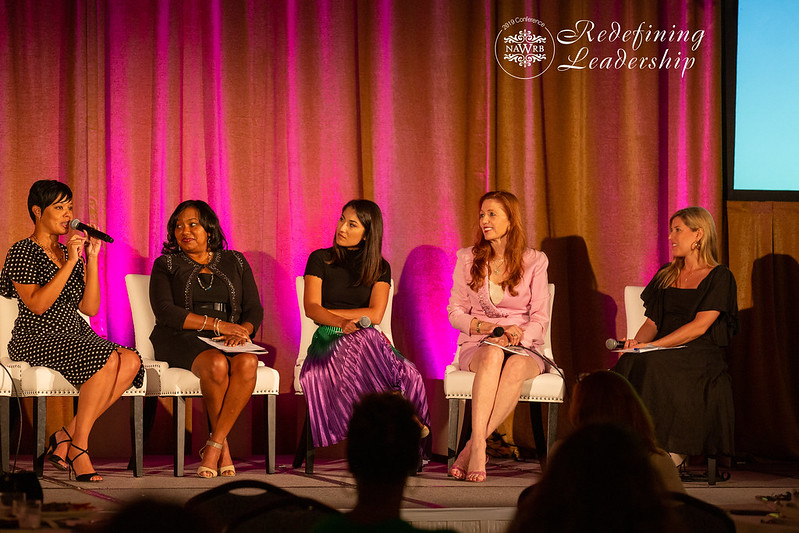 Senior executives and media industry experts joined in an honest, heartfelt conversation about the importance of humility and human connection for professionalism and their eye-opening experiences maintaining a work-life balance, during a keynote luncheon during the 2019 NAWRB Conference in Pasadena, CA.

One of the most insightful conversations was on the difference between being humble versus humiliation and how to strike the right balance. Being humble means having an open mind to other perspectives and to not have a stronghold on your beliefs. Having the humility to listen to opinions that might differ from yours is a sign of strength rather than weakness. Nicole Cober shared how working in Washington, D.C. has taught her to be humble.

Nicole Cober stated that dealing with opposition in Washington, D.C. is the norm, and it’s “not for the faint of heart.” She also said that people are often defined by their careers and act according to their titles: “You lead with what you do rather than who you are.” Confidence, however, goes a long way for success because it gives you the courage to not let others define you. “When you are confident, you work on yourself everyday and on not being threatened when people see something different,” Nicole said.

Whenever you face opposition, no matter what field you work in, Nicole suggests that you get through it with open-mindedness and respect. When people take criticism too personally, it can cause them to withdraw from people in general out of self-preservation. As she described it, “When we take things personally we go down a rabbit hole of isolation.”

However, isolation inhibits a dialogue that can be beneficial to both parties. Nicole shared that she had to learn to be open-minded while remaining rooted in who she is, and to be open to listening instead of judging. She also claims that open-mindedness can make one more empathetic to other people: “We you can see the humanity in someone, it’s hard to demonize them and judge them.”

Veronica Miracle added that she found the power of empathy through her work as a journalist. As a storyteller, she has learned that people resonate with news stories they can connect to on a human level and those that make them pause. She shared a story of a man who would put up crosses for each victim of a mass shooting. Her crew was able to capture this man as he put up each cross, Veronica was pleasantly surprised that it was the most popular story of the day. “We must recognize that people want to see moments of humanity and stillness,” she stated.

Another topic of interest was how these women leaders maintain a work-life balance with their responsibilities. Desirée Patno stated that she learned her work ethic from her father and made sure to have the entire family be a part of her business. From a young age, she taught her four sons about her line of work and that they were going to work together as a team.

Her children would find ways to make helping out fun, like racing to see who could get the most flyers to the most doors. Desirée taught her children that there was nothing they could not learn to do. Although she is still figuring out how to strike the perfect work-life balance, she always prioritizes her family when necessary. “When they need me, I’m there,” she stated.

Connie St. John stated that she chose to be a part of her son’s life more as a working mom. To achieve this, she made sure she could take her son with her after school, and chose jobs that gave her flexibility. When she had a health scare caused by the stress of her busy lifestyle, she had to remind herself that she needs to take care of herself. All of these stories pointed to an important message that working professionals need to make their health and wellbeing a priority, and make time for their loved ones.

At the end of panel, Moderator Alexis Crow asked the women on stage to present two pieces of advice they would give to young women. Desirée told the audience to “Always ask questions, get as much stage presence as you can and listen.” She explained that we can learn more from others when we make a concerted effort to listen to others rather than waiting for our turn to speak and to be present each moment instead of multitasking.

Veronica Miracle would advise young women to “Be grateful for where you are in the current moment and figure out where you’re going next.” As Jon Bon Jovie once said, “The future goes to those who know what song will be next.”

Nicole’s last resounding message was to “Love God, love yourself and love others in that order. My faith grounds me and my purpose. I know how to ground myself because I’m part of something bigger than myself. When I know how to care for myself, I know how to pick relationships that care for me, too. People do treat you the way you ask to be treated.”

“Women need to know 80 percent in order to have the confidence to act, while men get by with 20-30 percent,” Nicole continued. “Young women are afraid of the ‘C.’ We have to give ourselves permission to fail, to grow and move on. Failure is a building block to success.”

Thank you to all these wonderful women leaders for sharing their words of wisdom, as well as for their candor in speaking about their experiences in their lives that have molded them personally and professionally.