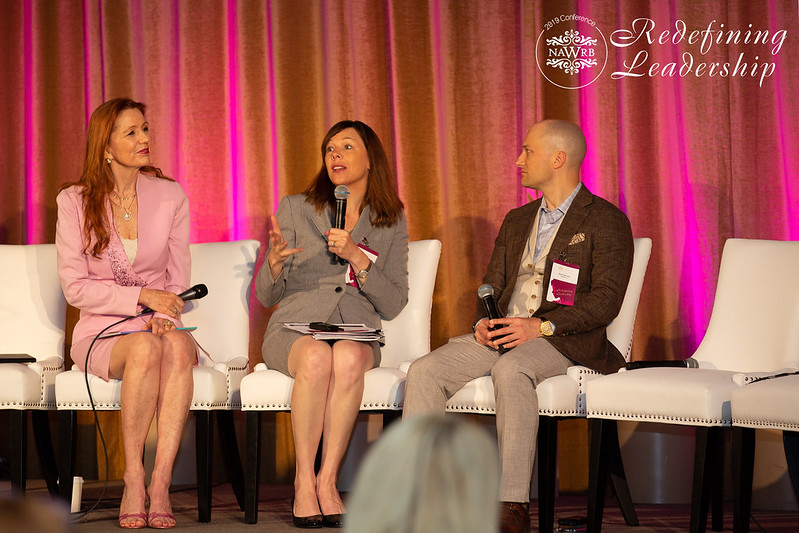 Industry experts were worried about a possible recession even before the advent of the COVID-19 crisis, and these discussions took place during the 2019 NAWRB Conference. Watch the newly released video featuring Moderator Desiree Patno, CEO & President of NAWRB, Advisor of Amicus Brain, Chairman of NDILC; and CSO of Zulu Time; Marina B. Walsh, Vice President of Industry Analytics, Research and Economics, at Mortgage Bankers Association (MBA); and Brian De Lucia, Managing Partner at Arrivato LLC, as they discuss how industries in the housing and real estate ecosystem can achieve social impact through data analytics, and other factors that could have contributed to today’s recession.

Marina Walsh is Vice President of industry analysis in MBA’s research and economics department, specializing in industry performance benchmarking for residential lenders and servicers. She has worked in real estate finance for close to twenty years.

Desiree started the discussion by having Brian talk about his work from a workforce housing perspective. Simply put, “You have to make the numbers work,” Brian said. From an economic perspective, it’s about controlling a budget, and some try to squeeze out every penny and end up outsourcing. This aspect is often overlooked by investors who are evaluating these opportunities. In contrast, Brian’s firm controls their own budget. They also acquire land all cash so they don’t have to go out and raise capital. This helps give them a cushion in case there is a recession.

Brian added that they do their own engineering for building projects, and they oversee their general contracting. Most importantly, they do not hide money into the budget. Being so hands comes with some risks, but it also creates large margins that they can absorb in case there is another recession. “Controlling your budget, playing the long game and making transactions favorable to the marketplace creates more velocity,” stated Brian.

Marina, who has been with the MBA for 18 years, talked about the state of the overall economy, as well as housing affordably from the perspective of supply and demand. Marina’s work focuses on the profitability of mortgage companies. She works closely with the CEOs and CFOs of mortgage companies, community banks, credit unions, and independent mortgage companies on how they can be profitable. Her job requires being up-to-date on the current status and projections of the housing market. Some of the questions she asks are: Is there a demand for housing? Is there demand for mortgage originations? What does this mean for profitability?

There has been talk of a possible recession similar to the one that occurred in 2007-2008, but Marina is fairly confident that the housing market won’t take us into a great recession. Part of the reason is that the housing market has been pretty weak lately as there is a big supply issue. For instance, 2018 was the worst year in profitability for mortgage companies overall. However, at the national level, the financial obligation ratios are not in a crisis situation.

Some good news regarding the economy is that the unemployment rate is at 3.7 percent. At the same time, Marina noted that the stock market has been volatile and there are trade tensions. Inventory is not keeping up with household growth, either. Wage growth has been rising slightly in the last two years but home price appreciation is increasing at a higher rate.

After the recession, for eight to ten  years, there was an increase in renter-occupied households, but now owner-occupancy is on the rise. Marina stated that there is a potential demand for condos on the rise, especially as Millennials are entering their 30s and becoming first-time home buyers. Millennials are not opposed to living in a smaller space if they can be in an urban setting with access to good education systems and opportunities. Increased homeownership has been especially prevalent among hispanic households and Millennials. Aging Baby Boomers are likely to stay put in their homes, but many they are remodeling.

Marina predicts that housing demand will be highest among the aging Baby Boomers and those between 25 and 28 years of age, or Millennials. Reports show that approximately 1.2 million households are formed each year. Young adults who were living at home are moving out due to increased wage growth. Overall, each generation wants different things when it comes to housing.

In terms of supply, Marina focused on the “Three L’s”: Land, Labor  and Lumber. There’s not enough  land and permitting is an arduous process in areas that need it the most. There’s also not enough construction workers in parts of the country, especially in areas that have been affected by the recent natural disasters. “Lumber” refers to the plethora of supplies needed to build housing projects, and they are very expensive. Due to the burden and expense of building  low- to middle- income housing,  developers are forced to ask themselves if it makes economic sense when they have to pay more to build.

Vacancy rates are at all time lows and we are not keeping up with housing formation. High end properties have the most deceleration in home price appreciation, but not for the low- to moderate- income buyer, which is where the need is. “There’s been some reprieve in house prices, but there needs to be more supply,” Marina stated.

The Opportunity Zone tax incentive was created as part of the 2017 Tax Cuts and Jobs Act to encourage investment in low- to moderate-income communities across the country through tax benefits, such as deferring tax on capital gains by making an investment in any of the designated zones. So far, 8,761 communities covering all 50 states, including the five U.S. territories, have been designated as opportunity zones, and they will keep this status for 10 years. Other legislation has been introduced in Congress for housing revitalization, as well. States such as Colorado, Ohio, and Wyoming are booming right now in terms of housing development, but there are needs in other parts of the country that are not being met yet.

In conclusion, Desiree asked the panel how climate change, such as record hot temperatures across the world, and related natural disasters affects the decisions made by real estate developers. Brian answered that his firm receives access to proprietary data that will eliminate speculation regarding weather in different areas that might be vulnerable to natural disasters. They also make sure to educate themselves on absorption rates, upcoming developments, and more, so they know exactly what they are getting into. Brian exemplifies that it’s in the best interest of developers and investors to prepare and educate themselves as much as they can about the area they are choosing to build in.