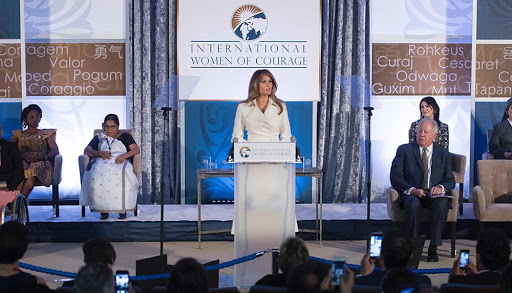 Earlier today, First Lady Melania Trump and Under Secretary of State for Political Affairs Thomas A. Shannon honored incredible women from around the world with the 2017 Secretary of State’s International Women of Courage Award. The award annually “recognizes women around the globe who have demonstrated exceptional courage and leadership in advocating for peace, justice, human rights, gender equality, and women’s empowerment, often at great personal risk.”

Introducing the ceremony, Shannon stated, “These women have mobilized public sentiment and their governments to expose and address injustice, speak against corruption, prevent violent extremism and stand up for the rule of law and peace, often with little more than their voices and sheer determination. We are honored to recognize this incredible group … Women’s empowerment is not just a moral imperative; it is a strategic investment in our collective security. In short, when women do better, countries do better.”

During her address, First Lady Melania Trump accentuated the importance of these revolutionaries. “As they continue to persevere against unimaginable odds, these women are extraordinary examples of reaching within to find the courage that lies inside us all to change the world,” stated the First Lady. “While learning the stories of these 12 honorees, I would like to ask each of us to take this moment and try to imagine what it would be like to experience the trying obstacles, domestic abuse, gender bias violence or government oppression that some of these women have faced.”

After each honoree was recognized and awarded, Malebogo Molefhe and Natalia Ponce de Leon concluded the ceremony with powerful speeches. Molefhe thanked the courageous women around the world who stop at nothing to effect change and emphasized the importance of recognizing women dedicated to creating a better tomorrow for women and girls.

Ponce de Leon spoke of how she chose to stand up, make a difference and live a life with a mission after suffering an acid attack at the hands of a former boyfriend. “We have nothing left than to clear the future path, to have the courage that no matter how tough the situations are we can reach more,” she stated. “This is not only my fight; it’s everyone’s fight, because tomorrow this could be your son’s story, your daughter’s story or your own story.” Ponce de Leon is an advocate for stopping violence against women and works diligently to establish burn units in Colombian hospitals.

Beginning on April 1, the honorees will travel across the United States as part of an International Visitor Leadership Program. The program is intended to foster collaboration and lasting relationships between current and emerging leaders and American counterparts. The awardees will visit Atlanta, Denver, Des Moines, Minneapolis, New York, Pensacola, Pittsburgh, Portland, San Diego and Tampa.

Recognizing groundbreaking women leaders is essential to supporting their extraordinary work and raising awareness of women’s obstacles. The gender imbalances women face are extensive, and the awareness and global collaboration generated by this award make a powerful impact in the movement for women’s gender equality.