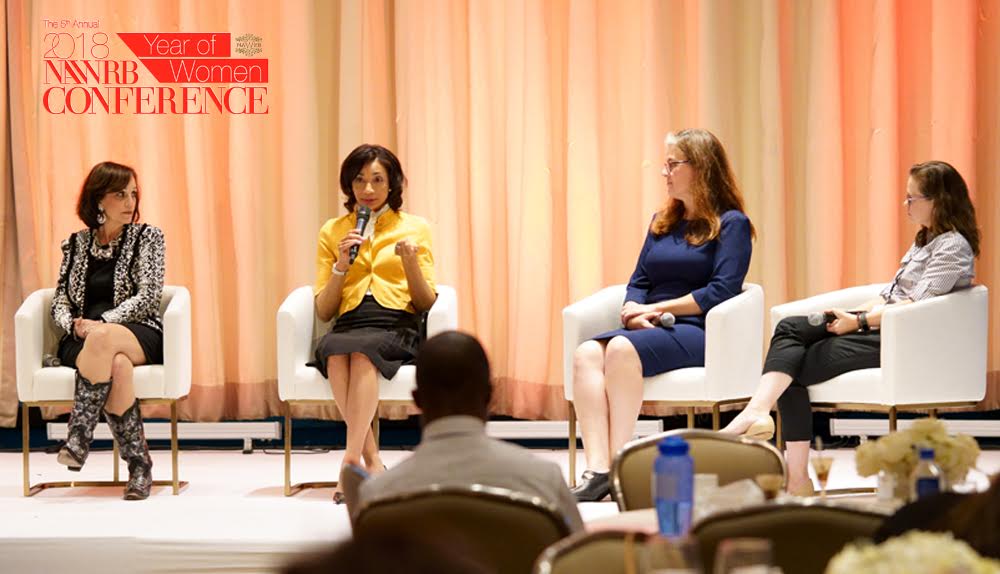 From its title alone, you can tell this panel was a little different from the others. Wide-ranging in scope, yet narrow in its focus on issues that derail women from advancing in life, the conversations held on stage focused on topics people are sometimes uncomfortable talking about including sexual exploitation and poverty.

Moderated by NAWRB President and CEO Desirée Patno, our experts were Carie Bires who sits on the Board of Directors for the National Association for the Education of Homeless Children and who is Youth and Senior Policy Manager at the Ounce of Prevention Fund, Karen Collins Founder & President of Collins Collaboration LLC, Kaethe Morris Hoffer, Executive Director, Chicago Alliance Against Sexual Exploitation, and Judy Hoberman, President, Selling in a Skirt.

Kaethe started things off by talking about the mission of the Chicago Alliance of Sexual Exploitation which is to work on the full spectrum of sexual abuse: from the most extreme to the most subliminal, from the sex trade to the workplace. She then discussed the epidemic nature of sexual exploitation in the U.S. today, citing an alarming statistic: 16,000-24,000 women and girls in Chicago engage in some form of prostitution activity. Many of these women don’t have better options for getting by and the overwhelming majority are survivors of childhood sexual abuse who entered into prostitution as teenagers.

In the country as a whole, a quarter of all women in the U.S. have experienced some form of sexual harassment or exploitation. She put this into context with a stark visual: anytime you are in a group of more than four women, you are likely in the presence of a survivor of some form of sexual abuse.

On the question of where to go for help if you are the victim of sexual exploitation, Kaethe pointed to national hotlines such as the Polaris Project. “As long as you can access the internet,” she says, “You have access to high-quality resources.”

Poverty creates a cycle where mothers lacking resources are unable to properly care for their children which can set those children back both cognitively and emotionally. “Learning begins at birth with the Ounce,” said Carie Bires on Chicago’s Ounce of Prevention Fund, founded by our keynote speaker, First Lady of Illinois Diana Rauner.  “We need to take better steps so that high-risk children are able to be in environments with positive experiences and caregivers,” she emphasized. Parent/child attachment is critical and homelessness and poverty create barriers to forming that attachment as parents are struggling to meet basic needs. Karen, who has a background in real estate and finance and is on the D&I Council for the American Heart Association talked about the idea that housing is so important to our well-being and that life expectancy can vary by as much as 25 years by zip code.

The panel then connected the dots between health and finances with the idea that we can’t be healthy financially if we aren’t well and we need to take a look a better look at communities that don’t have resources like hospitals or that have food deserts. Things that aren’t so obvious, like recovering from natural disasters are drastically different depending on the income level of the neighborhoods.

Judy Hoberman sees herself as more than a motivational speaker she is a storyteller, helping people make connections through vivid narratives. “Women are the worst critics of themselves,” she told the audience and talked about the power of “rewinding the negative tape” that you may have played in your head.

Financial literacy is important as well as she pointed out a poor relationship between women and money can lead to a lack of confidence and ability to move forward. And men are important too, she emphasized, reflecting a running theme throughout the conference. “I don’t ever leave men out ever,” she remarked. “You have to find the ones that champion women.”

“We have a responsibility to help each other on another level,” added Carie. “Those of us who are privileged, we have an obligation to address the systemic issues.,” She acknowledged that larger problems can be overwhelming so stretching outside of your sphere to connect with others who share your views  can help along with working on the edges of a larger problem and getting involved with nonprofits in your community.

One of Carie’s goals is to expand access to child care assistance funds for disadvantaged women. She asked members of our audience to reach out to the subsidized child care in their state and ask that allocated funds be increased.

Kaethe meanwhile is engaging on a nationwide search for a woman to become Director at her organization as they recently finished a strategic plan relating sexual harm to systems of inequality, as sexual exploitation and abuse lands disproportionately on women, people of color and immigrants.

In the coming months, Karen wants to increase her influence on the corporate level by serving on boards. Through her work with the American Heart Association she has been able to see the link between stress and heart disease. Women who do not have adequate housing and who are trying to make ends meet with limited resources and who don’t have access to healthy food undoubtedly face greater stress. Judy through her foundation, aims to donate a portion of the sales of her book “Walking on the Glass Floor” to charities, hopefully reaching a minimum of a quarter of a million dollars.

By increasing growing NAWRB’s staff  next year, Desiree hopes to grow NAWRB’s WHER report, leveraging platforms and becoming the go-to experts in the communities they are involved in.

This intimate discussion with experts in these sometimes sensitive topics proved that while larger issues like poverty, sexual abuse and exploitation can seem overwhelmingly large, by focusing on the organizations on the ground and individuals in need of help and even through strengthening our own self-confidence as women, we can make a difference.