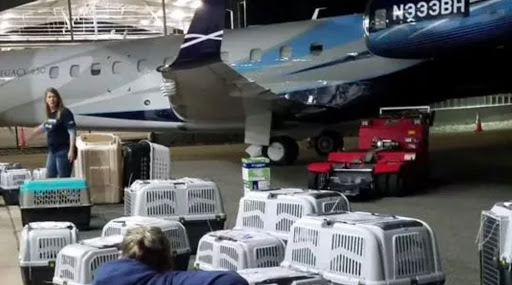 Rescued from residences, shelters and even the flooded streets, hundreds of pets are finding homes across the country after being rescued from Puerto Rico in the wake of Hurricane Maria. Just Wednesday night, 79 dogs and 25 cats arrived in South Florida from Save a Sato, a shelter damaged during the hurricane.

Nearly two dozen dogs have arrived this week in Cincinnati and will be ready for adoption by the end of next week after medical examinations and procedures. “Animals are resilient,” said Mike Retzlaff, COO of SPCA Cincinnati. “They can overcome illnesses to handicaps to here, now, a different area. They were born and raised in a tropical climate … but I think they’ll adapt just fine here.”

On Monday, 82 homeless cats and dogs arrived in Indianapolis from Vieques, a small island off the eastern coast of Puerto Rico. All 82 animals have health certificates and required vaccinations, and will be cared for by area shelters and rescue partners.

The placement of these animals in the U.S. has helped make space for displaced animals in Puerto Rico. For Puerto Rico, where nearly 80 percent of people are still without electricity, this is a small but needed helping hand.

When donating, it’s crucial to ensure you are contributing to a reputable organization and that you know how your money will be utilized; Charity Navigator is an effective resource for this.